It’s the kind of publicity a small business owner dreams of. Rock star walks into your store, puts on one of your coats. Pictures are taken. Images are then sent around the world.

That’s what happened to shop owner Darren Halloran this weekend. He took a photo with Rod Stewart wearing one of his coats at his St. John’s, Newfoundland store, Always In Vogue. That coat is made of sealskin. 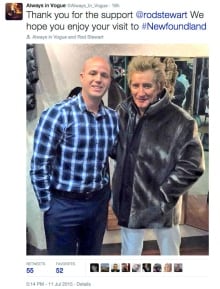 Halloran shared that photo on social media and Stewart faced a backlash from all corners of the globe. Now, Rod Stewart claims he had no idea the jacket was made of sealskin.

“It’s a reaction that you’d probably get from any celebrity who’s getting slack from the anti-sealers,” Halloran tells As It Happens guest host Laura Lynch. “I wasn’t surprised. I was a little disappointed. I had spent a lot of time with Mr. Stewart explaining what we do and how proud we are to make these jackets in our store. I was hoping that he would be one of the celebrities that would stand up for the industry — he does own 21 fur jackets. I didn’t think he was against fur, and I don’t think he is, I think he’s just backing down from the bully people that are out there and he’s doing what he can do to keep selling tickets.”

Stewart’s representatives claim in a statement that Stewart was “not being fitted for [the sealskin coat] it as has been alleged and had no intention of buying it.”

It continues: “Rod regrets that he didn’t check what the jacket was made of but was so grateful for the shop’s help, he did not. Rod has since been very upset to learn that the shop has been using this image as an advertisement for an industry that he does not know much about and certainly does not support.”

Halloran disputes this. He says he did not try to profit from the photo of Stewart in the jacket, and didn’t even identify it as sealskin when he posted the photo to social media. “I’m not saying he’s a liar, but I’m saying he knew it was seal. Maybe he didn’t know what comes as a repercussion of putting on the seal jacket. It’s the most bullied industry in the world right now, and maybe he didn’t know all the facts about it, but he did know that it was a seal jacket.” 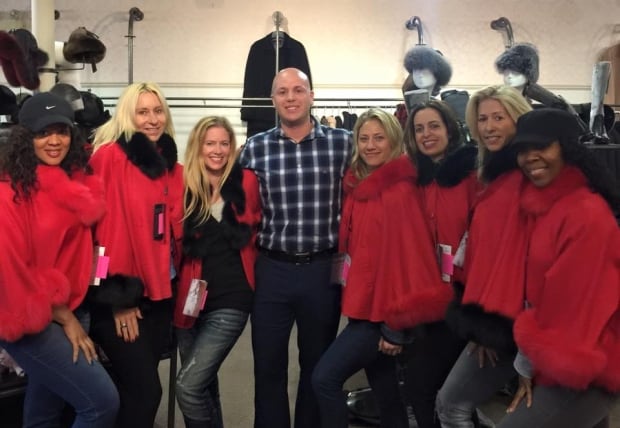 Stewart’s band and backup dancers pose with Darren Halloran after being fitting for fox fur and cashmere capes. (Always In Vogue/Facebook )

Always in Vogue furriers has been operating for 54 years and Halloran defends the seal hunting industry.

He adds that despite the controversy, he doesn’t hold a grudge against Stewart.

“I feel bad that he’s going through this. He was a really nice man and he was an unbelievable person. And I still think he is.”

Would he let him in his shop again, though?